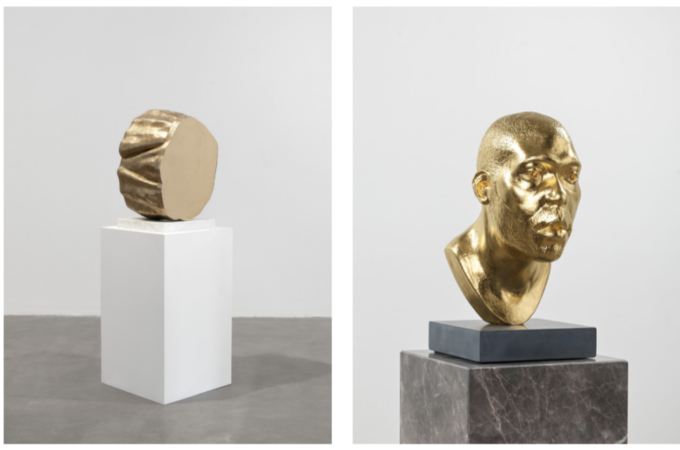 Thomas J Price’s multidisciplinary practice confronts preconceived public attitudes towards representation and identity. For his first solo exhibition in Switzerland, titled ‘The Space Between’, Price presents a selection of small and large-scale sculpture spanning two decades, alongside two of his film works that show another dimension of his practice. The exhibition is an exploration into the artist’s long-established preoccupation with ancient traditions of monumental sculpture, alongside an intrinsic understanding of the symbolic power and hierarchy held in materials. Price’s sculptures depict imagined subjects through the artist’s hybrid approach of traditional sculpting and intuitive digital technology. ‘My work references art history as a means to reveal our learnt understandings and attitudes towards representation within the traditional canon and the systemic marginalisation within it’ states Price. The exhibition coincides with ‘Witness’ at Marcus Garvey Park with the Studio Museum Harlem, NY, until October 2022, as well as the installation of the sculpture ‘Reaching Out’ at Chillida Leku, San Sebastian on view until June 2022. 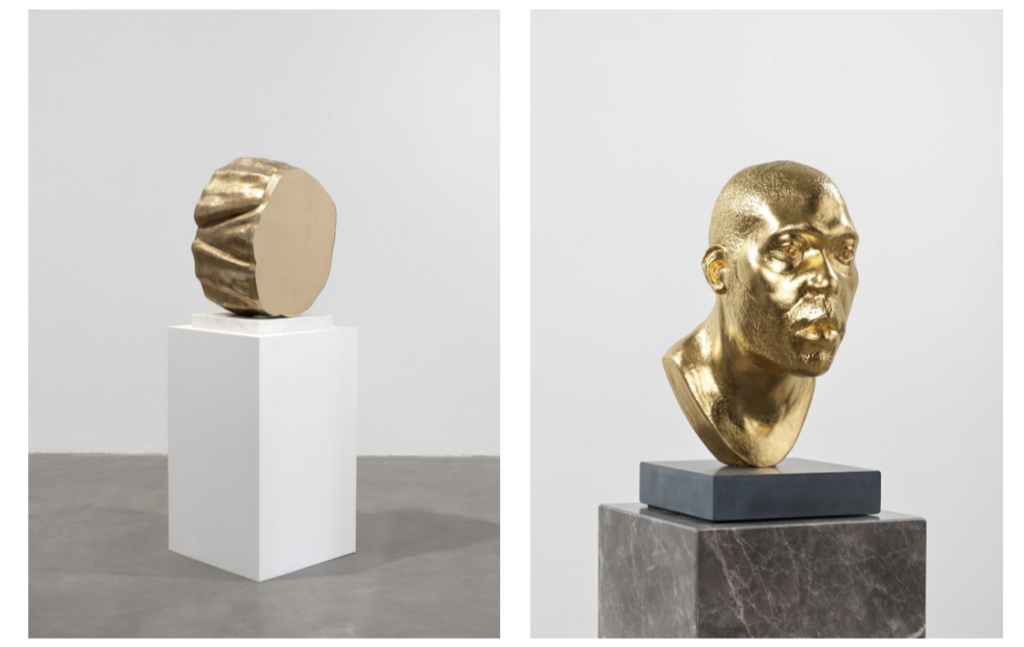 Price refers to his fictional subjects as psychological portraits of the viewer: ‘The viewer brings themselves to the works, they bring their understandings, their schemas, their set of values which they use to navigate the world around them’. His figures and heads are amalgamations of various sources, from observed individuals and stereotypes represented in the media, to references to ancient, classical, and neoclassical sculptures. Materials and methods used in Greek and Roman statuary are combined with 3D scanning and modelling to generate transhistorical forms. In ‘Numen (Shifting Votive 1, 2, 3)’ (2016) Price combines the traditional process of lost-wax casting with aluminium, a material more commonly associated with modern engineering, to present a series of emblematic heads raised to eye-level on marble columns.

Similarly, ‘Icon Series’ (2017) adopts gilding, a technique which dates to Ancient Egypt and amplifies a sense of luxury and splendour, alongside 3D printing to create the casting molds. Placed on quartzite plinths, the sculptures exude a powerful cultural resonance, challenging our awareness of current iconography and the unmediated immortalisation of triumphant figures. Price’s Icons gaze beyond the viewer and are consumed in their own thoughts and emotional worlds, reframing the image and associations of Black men in contemporary society today. These contemplative works embody objects of worship for the modern age, whilst uncovering the haptic depths of Price’s expanding range of mediums.

This theme is extended in new modes of display within both ‘Power Object (Section 1, No.1)’ (2018) and ‘Sonic Work (Collective Palette #01)’ (2020/21). The two distinctly abstract bronze works share an aesthetic of 20th century modern masters, critiquing an art historical canon that has contributed to the misinterpretation of Black male identity. At first appearing as an abstract monument on a Carrara marble plinth, ‘Power Object (Section 1, No.1)’ depicts the cross section of a groin of a male figure in jogging bottoms. Price considers whether this object is projecting power, or rather subjected to it. The title itself reveals the racial disparity of Britain’s stop and search policy, ‘Section 1, No.1’.
Whilst the majority of Price’s oeuvre relates more closely to the male figure, ‘Lay It Down (On The Edge of Beauty)’ (2018), as well as his most recent work in the exhibition, ‘Reaching Out’ (2021), mark a poignant shift towards female identity and a shared Black experience. ‘Lay It Down (On The Edge of Beauty)’ extends Price’s line of enquiry into deities, illuminating universal threads within popular culture, media, and fashion that relate to signifiers of Black womanhood. Price intends to spotlight the stigma associated with hairstyles and formal conventions of beauty, as well as the lack of acknowledgment when they are reappropriated outside of their true origin. 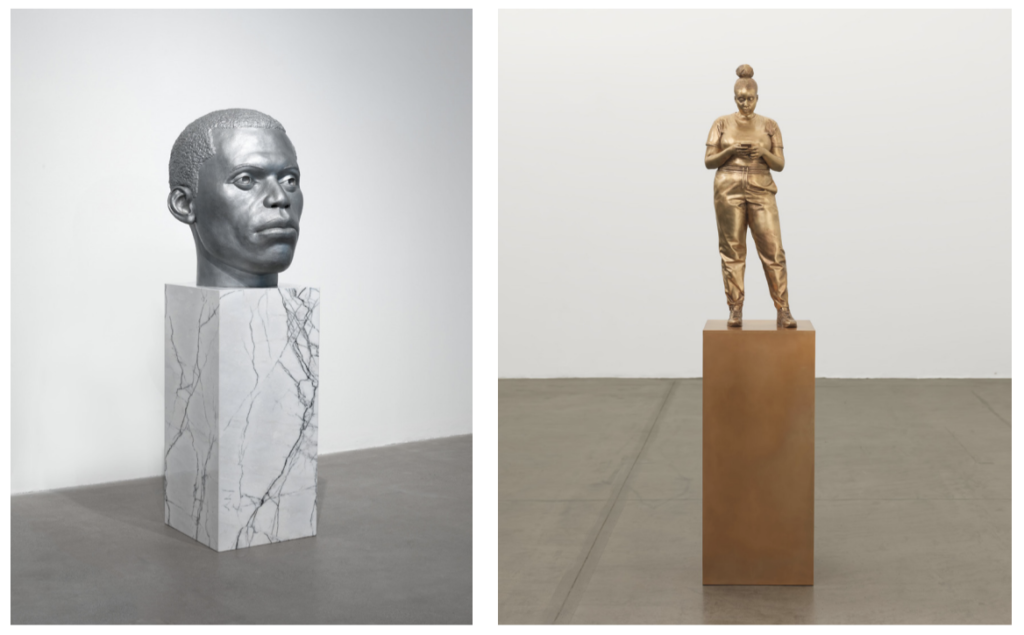 Harnessing the narrative power of performance, film and animation have been a consistent element throughout the artist’s career to date. ‘Man 10’ (2012), a stop-motion animation, demonstrates an early desire to respond to the history of racialisation and magnifies the complexities of deep social tensions.
Drawing upon his own lived experience and commonplace observations, Price elevates our awareness of unconscious forms of communication through subtle shifts in facial expressions and movements. Also on view in the exhibition is Price’s later film ‘From the Ground Up’ (2016), a two-channel work which presentsvthe artist lacing and cleaning different pairs of shoes from a fixed bird’s-eye view perspective. Slowly working his way through an array of footwear, from white trainers to black leather shoes, Price explores themes of material culture and the value we place on objects, as well as the social cues they instigate.

Thomas J Price has rapidly become one of the most important British contemporary artists of his generation, subverting stereotypical representations of figures we value in society and traditional power structures. After studying at Chelsea College of Art, he completed his MA at the Royal College of Art in 2006 and began further interrogating the language of monumentalism to question the status inherent in public sculptures. Price has exhibited widely in the UK and internationally, including solo exhibitions at the Yorkshire Sculpture Park, West Bretton (2014), National Portrait Gallery, London (2016) and The Power Plant Contemporary Art Gallery, Toronto (2019). 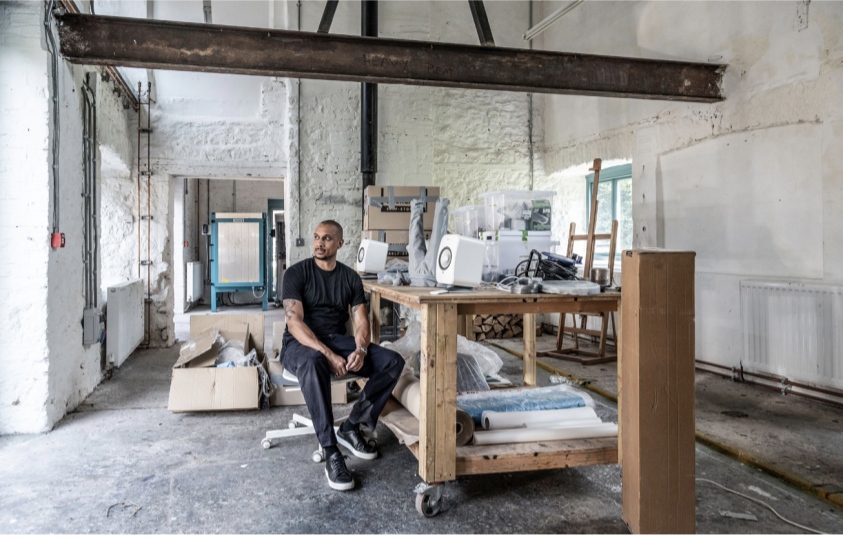 In 2020, Price was commissioned by Hackney Council to create the first permanent public sculptures to celebrate the contribution of the Windrush generation and their descendants in the UK, to be unveiled in June 2022. Price joined Hauser & Wirth Somerset as artist-in-residence from July-October 2021 ahead of his inaugural solo exhibition with the gallery.