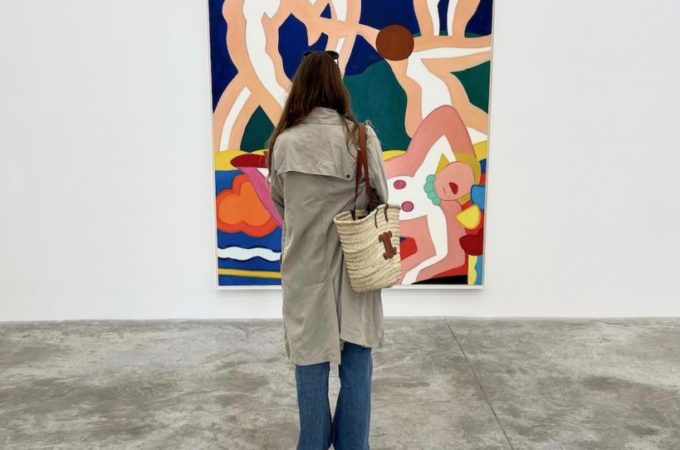 Paris, 9 June – WHAT WE ADORE magazine had an exclusive preview visit this morning to the Almine Rech gallery in the Marais, with a private guide who took us into the fascinating world of Tom Wesselmann and his artwork, which lit up our morning with his positive attitude and eternal colours. He always had Matisse in mind, for sure, but he found his own way and forms & tried to do the opposite of Matisse’s style in some details. But who was Tom Wesselmann and what is his story? 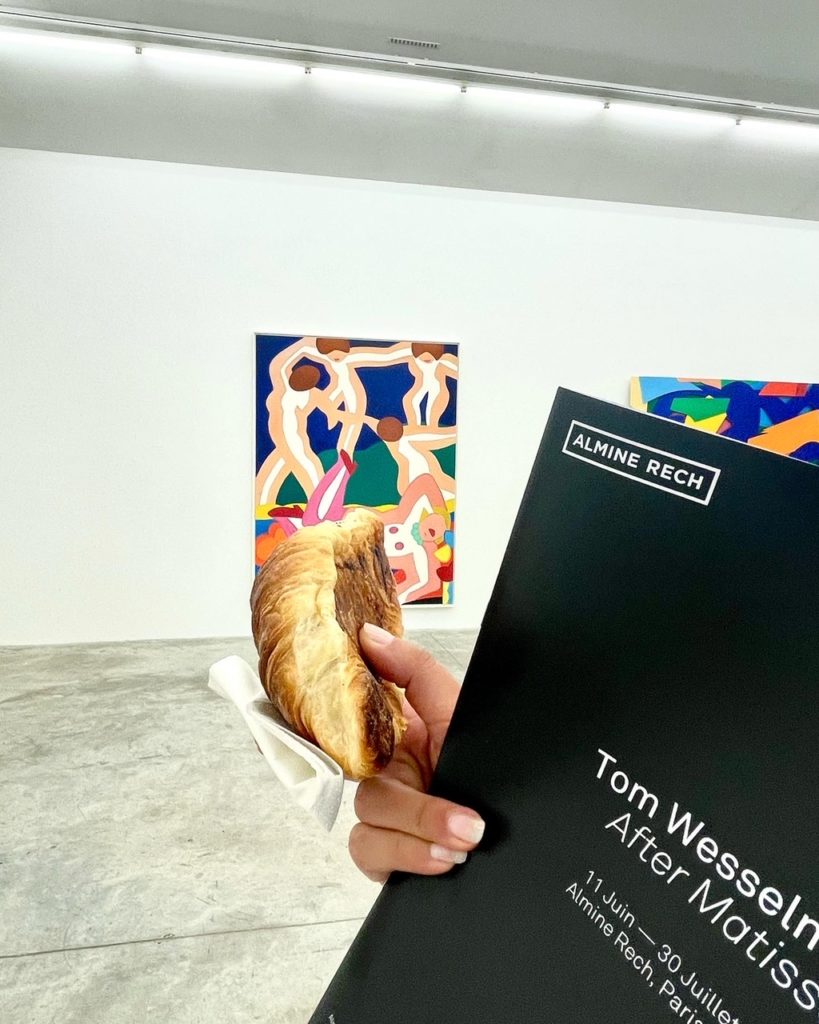 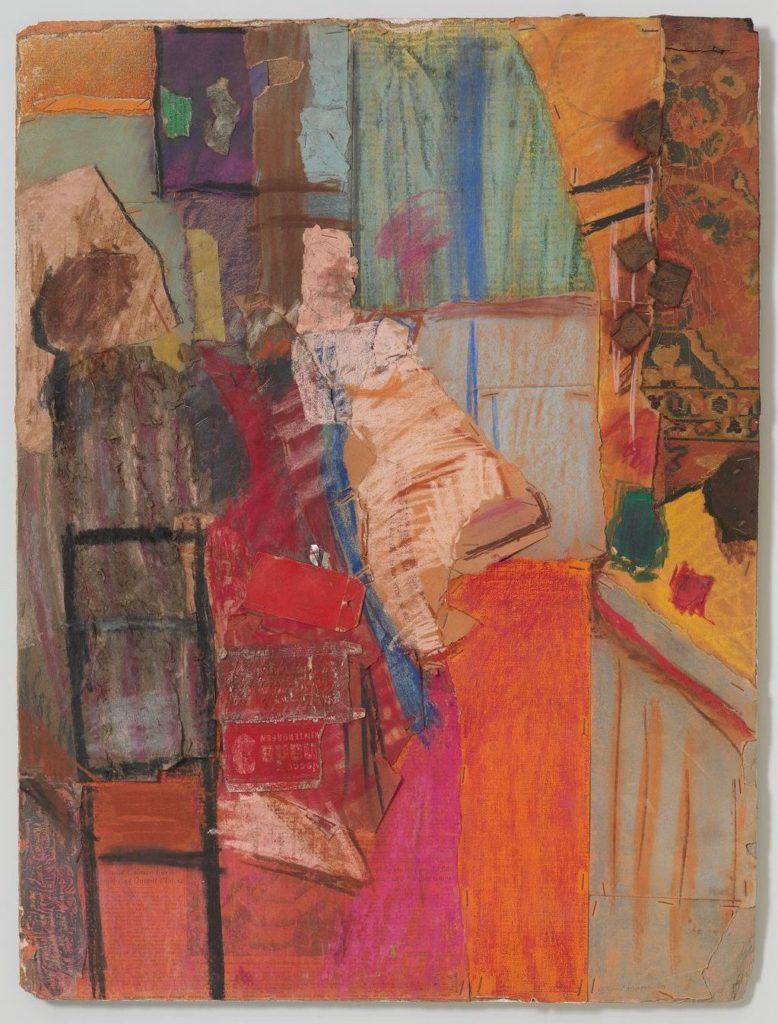 Tom Wesselmann (1931-2004) built his figurative work, a singular fusion of colour and line, in a constant dialogue with Matisse. He discovered the French master during his studies at the Cooper Union (1956-59), where his teacher Nicholas Marsicano encouraged him: “You have to find your own way… You can’t do Matisse.” (1) Wesselmann thus succeeded in surpassing De Kooning and found his own way by declining controlled and precise contours, bright colours laid down in flat areas, and all the sensual imagery popularised by Matisse (2). It is possible that Matisse’s cut-outs, exhibited in 1961 at the Museum of Modern Art in New York, strengthened his interest in the artist by encouraging him to explore variations on a theme in the form of series (3).
Wesselmann often cited Matisse in his Great American Nude series, which began in 1961 and eventually numbered about a hundred paintings spread over almost a decade. 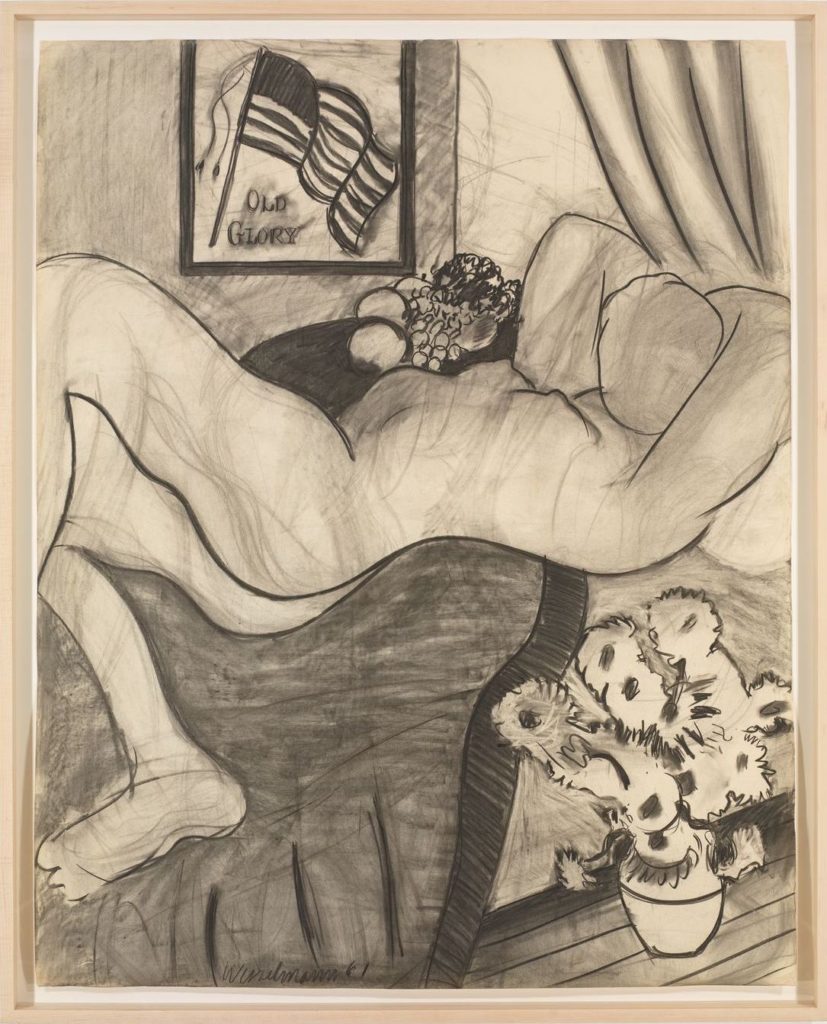 In the 1980s, Wesselmann began a series of drawings on laser-cut painted metal, many of which were inspired by one of his favourite models, Monica Serra (4). 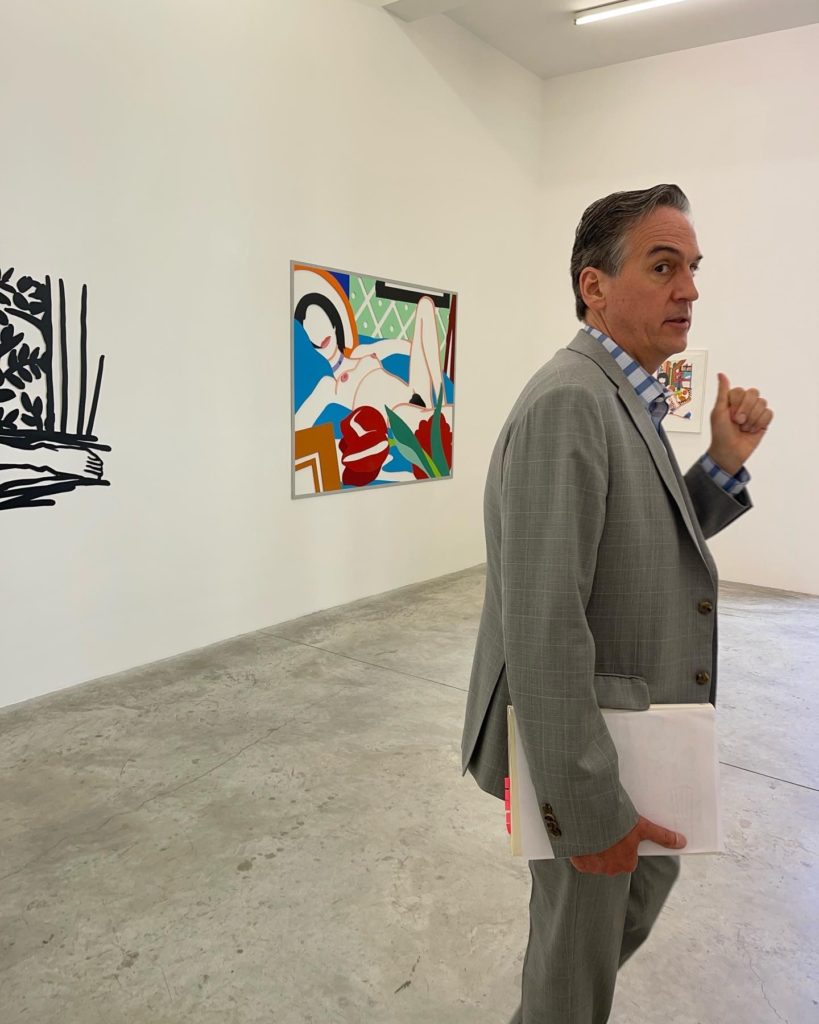 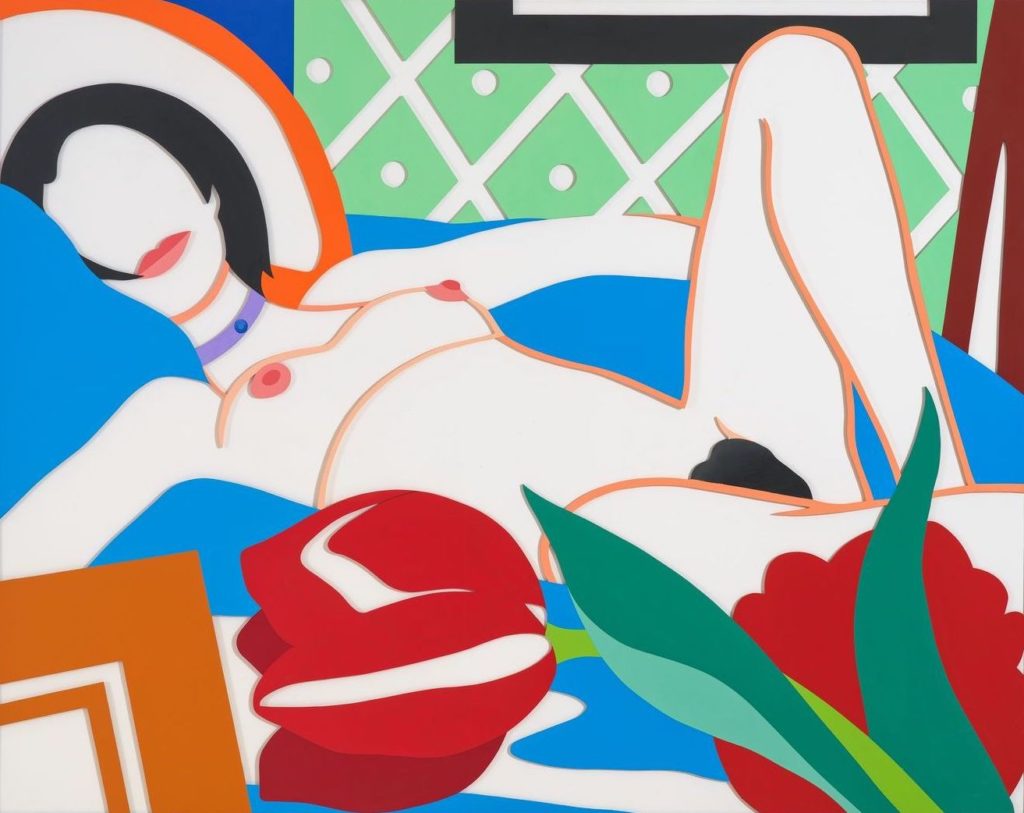 Wesselmann also composed a series of still lifes in cut aluminium, a transposition of Matisse’s motifs in the 1980s; he continued this theme in the 1990s through tributes to Matisse and his contemporaries, such as his 1993 Still Life with Matisse and Johns (3D) (5). In 1992, Wesselmann visited the monumental Matisse retrospective at MoMa, which remained for him an “overwhelming” experience.
Wesselmann’s last major series, the monumental Sunset Nudes, is among his most ambitious and chromatically brilliant and “unequivocally reaffirms his allegiance to Matisse” (6). As John Wilmerding has observed, Matisse seems to return to Wesselmann in the last months of his life, “not only as his most powerful inspiration, but as a quasi-hallucinatory vision.” (7) Weakened by heart failure, Wesselmann may have identified with Matisse, who had also suffered a difficult end to his life. The Master himself appears in Sunset Nude with Matisse Self-Portrait and various related studies in the form of a charcoal self-portrait from 1937, repeated in ‘a convincing trompe l’oeil of black and white’ (8). Contemplating the artist and the viewer, Matisse dominates a nude wearing turquoise stockings, simplified, eroticized, and embedded in an abstract, colorful setting reminiscent of the precise contours and hedonistic warmth of Matisse’s cut-outs. The reference to Matisse in these late works takes the form of paintings rather than collages, which only reinforces the sense of unity that links the common lines of force of both artists: colour and line, abstraction and figuration, sensuality and intellect. 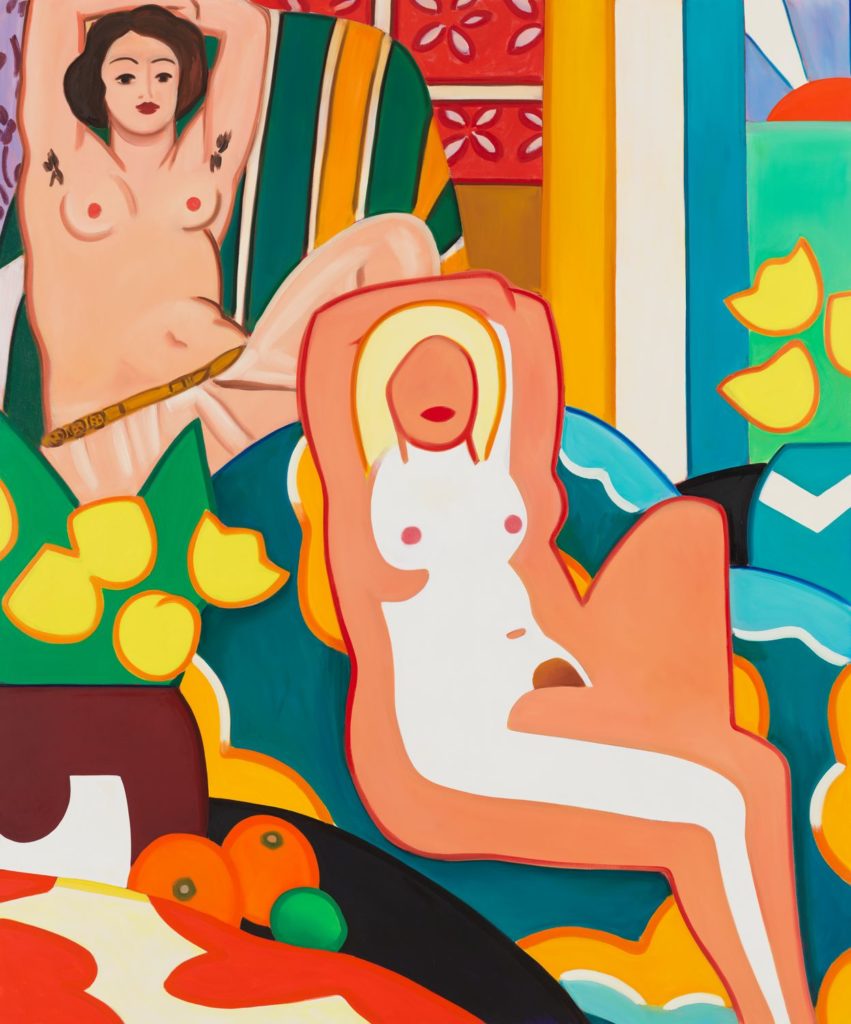 For Wesselmann, Matisse’s work served as a springboard to a more
eroticism that was more assertive, more daring, and specifically American.
When discussing his own use of oversimplified curves and his use of bright positive/negative colour forms as a means of disrupting compositional harmony, Wesselmann explains, “Subtlety is a European concept that I am not interested in.” (9) For all that, his work, especially late, suggests that he sees himself as an American heir to Matisse, disregarding decorum with all the discipline of a complete artist who makes many preliminary studies and works in different media.
While referring to his library of Matisse works – dating from 1931 to 1992 – Wesselmann was able to produce creative variations on Matisse’s classic nude and still life themes that are in themselves eminently original compositions. (10)
– Gail Stavitsky, Author and Chief Curator, Montclair Art Museum 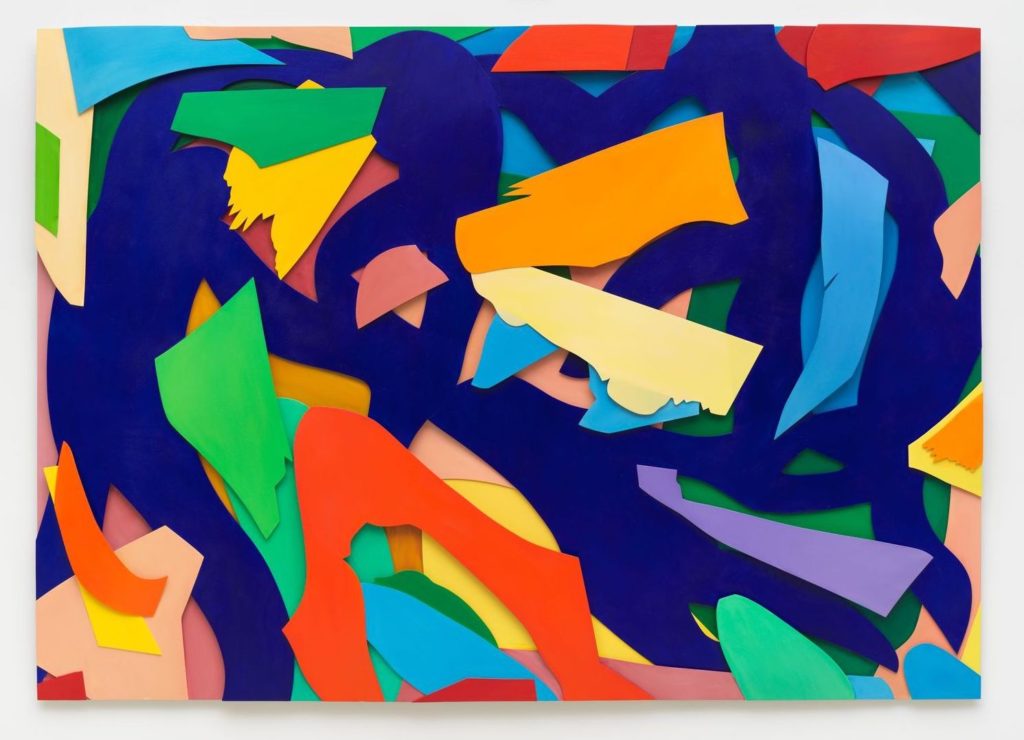 YOU CAN VISIT THE TOM WESSELMANN // AFTER MATISSE EXHIBITION FROM JUNE 11 – 30 JULY AT THE ALIMNE RECH GALLERY IN PARIS.

1. Wesselmann, interview with Irving Sandler, 3 January – 8 February 1984, Archives of American Art, Smithsonian Institution, Washington, D.C., p. 12.
See also John Wilmerding, Tom Wesselmann: His Voice and Vision (New York: Rizzoli, 2008), p. 36, discussing the importance to Wesselmann of Ernst Gombrich’s The Story of Art in his discovery of the historical precedents of the nude and Matisse.
2. David McCarthy, The Nude in American Painting, 1950-1980 (Cambridge and New York: Cambridge University Press, 1998), pp. 92-94.
3. Wesselmann, however, did not own the exhibition catalogue, and there is no indication in his diary that he went to the exhibition; information kindly provided by Jeffrey Sturges.
4. Wilmerding, Tom Wesselmann, pp. 144, 160.
5. Ibid.
6. Richard Kalina, “Pop’s High Modernist,” Art in America (December 2006): 126.
7. Wilmerding, Tom Wesselmann, p. 253.
8. Judd Tully, Tom Wesselmann-Sunset Nudes, cat. exp. (New York: Robert Miller Gallery, 2006)
[n.p.]
9. Diary, year, p. 4, copy courtesy of Jeffrey Sturges. See also Slim Stealingworth, Tom Wesselmann, pp. 18-20: ‘The ideal was competition rather than harmony…
The curves are not Matisse’s; they are a way of helping positive and negative forms to free themselves from each other.”
10. Wesselmann’s library contains eleven books on Matisse, several of which are annotated in his hand, such as the catalogue of the centenary exhibition (1970). 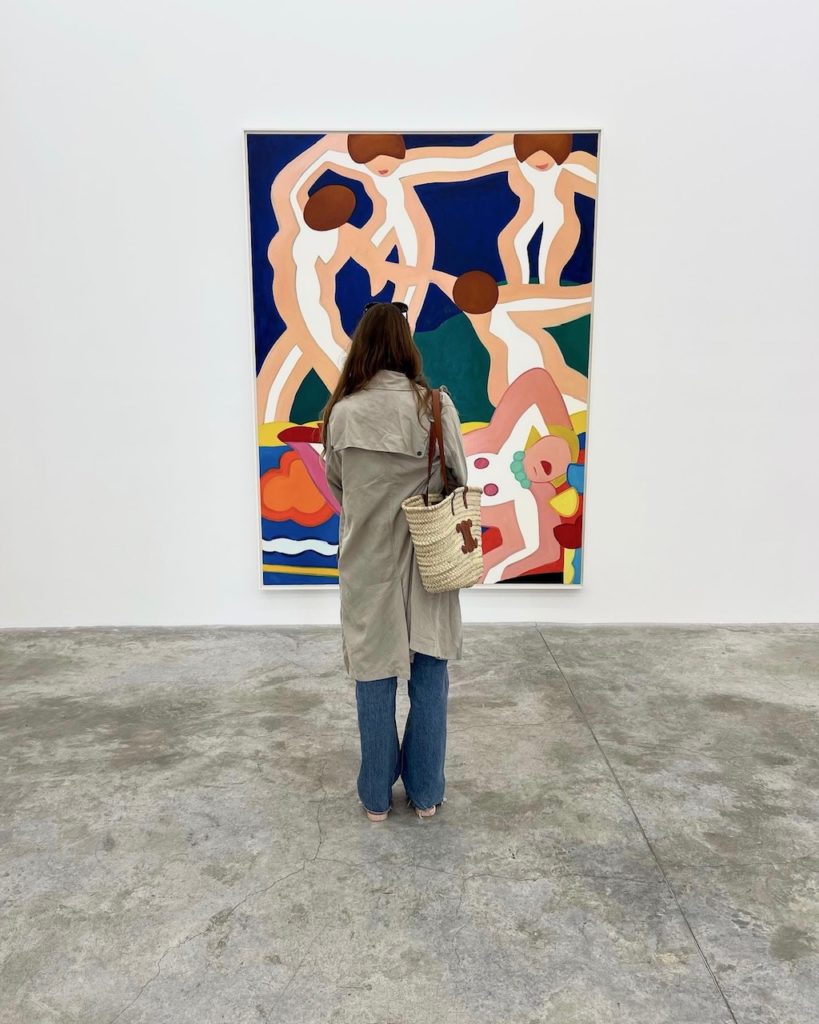 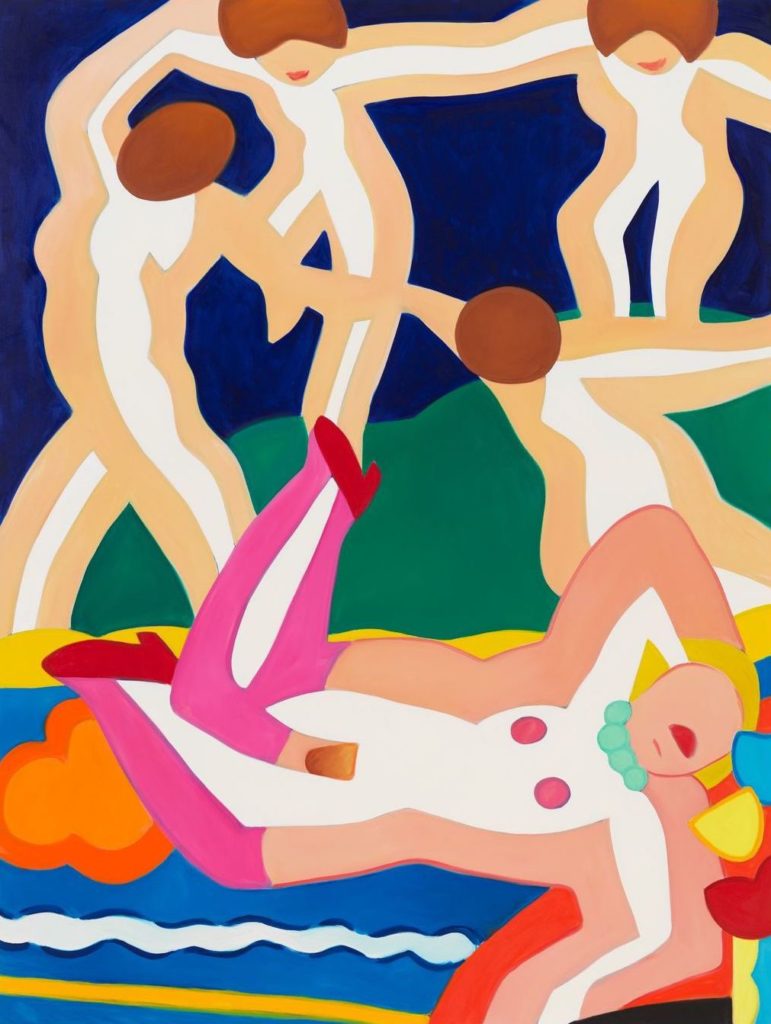