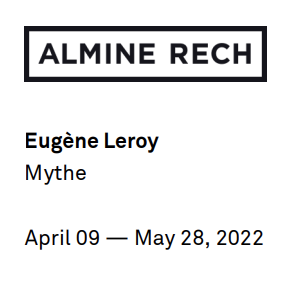 Born in 1910, Eugène Leroy spent many hours during his studies at the Palais des Beaux-Arts in Lille, where he saw the paintings of Rubens. He quickly showed a certain rejection of the academic conventions that were taught to him. Bored with his studies, he continued his training by visiting Flemish museums, where the work of Rembrandt particularly affected him. His peregrinations extended to the whole of Europe, then beyond the borders of the old continent, driven by the desire to learn from painters who “saw what he would like to know how to see” (« voient ce qu’il aimerait savoir voir »)[1].

The art of these impasto painters was like an authorisation for Eugène Leroy to commit himself even more to his penchant for working with the thickness of the material. However, the artist never lapses into pure imitation but, on the contrary, draws on this otherness to affirm his own artistic singularity.
His first works show classical subjects, portraits, landscapes, floral compositions and religious scenes, and nevertheless leave their mark in that they are already distinguished by the ardour of his brushstrokes and the movement that emanates from his canvases, going against the artistic conventions of the time.”

This thickness obtained is an excess [3], a gargantuan accumulation of paste, a superimposed layers, a vertiginous heap; an excess that is in fact in every way measured and measured and sought-after.
The deposit of paint directly from the tube allows for a raw rendering, with an unshaped appearance, as if it were a appearance, like the fruit of a primary intuition far from any mental elaboration, as if the as if the paint composed itself spontaneously, instinctively, independently of mental conventions, instinctively, independently of artistic conventions and of the artist himself.

“All I have ever tried to do in painting is to achieve […] a kind of absence almost, so that the painting is totally itself”[4].The approach was intended to be one of total experience, of the act of creation, far from the conventions and theories g overning modern painting and the attempts at reform to which it was then subject. His studio is entirely covered with paint that overflows the canvases, creating a pictorial immersion, an invasion of the space of the real world and not not confined to the support. For Eugène Leroy, it is not simply a question of crossing the borders that separate the background and the subjects, the canvas and the studio, or art and life, but of abolishing them. He refuses to assign them to a strict place and seeks, on the contrary, to favour their dialogue and the permeability of one to the other. “More than ever, I confuse my life and my painting […]”[5].

What Eugène Leroy offers us is a painting of the sensitive, the living and the moving, of perceptible matter, of the sea, of landscapes, of bodies and their flesh, stirring up emotions and senses. The artist deliberately destabilises us, the spectators whose eyes are accustomed to always trying to identify, define and name what they observe. Yet what his canvases reveal is unspeakable, the result of a “disidentification of the motif” [6] that he deliberately undertakes in his paintings. Here we are, baffled, deprived of our ability to explain what we see, so unrecognisable is the painted subject, and thus rendered, for once, mute. It is a rupture between seeing and knowing [7], which makes any understanding difficult. It is the result of the superimposition of innumerable layers of paint which, like strata, absorb the subject without erasing it. For Eugène Leroy, the absence of the subject, which at first sight is obvious, actually makes it all the more present.