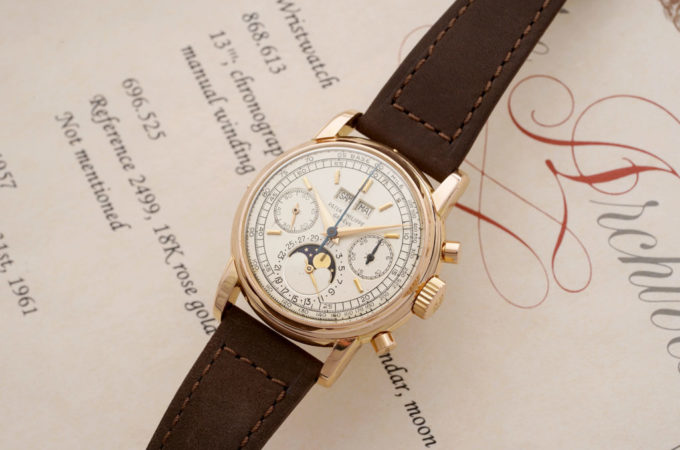 Including a Full Set of Four Patek Philippe Reference 2499 (1st, 2nd, 3rd and 4th series) to be Offered in The Geneva Watch Auction XIII

Following its most successful year ever, with a market-leading annual auction total of over US$133 million, Phillips in Association with Bacs & Russo is delighted to announce five extraordinary Patek Philippe wristwatches for this year’s Spring auction season. The full set of Patek Philippe perpetual calendar chronograph reference 2499 series comes from a prestigious single owner collection that took almost 20 years of dedication to assemble, will lead The Geneva Watch Auction XIII, including an ultra-rare 2nd series in pink gold. In addition, The Hong Kong Watch Auction XII will offer an elusive Patek Philippe minute repeating perpetual calendar reference 3974 in pink gold, one of five known to the market. 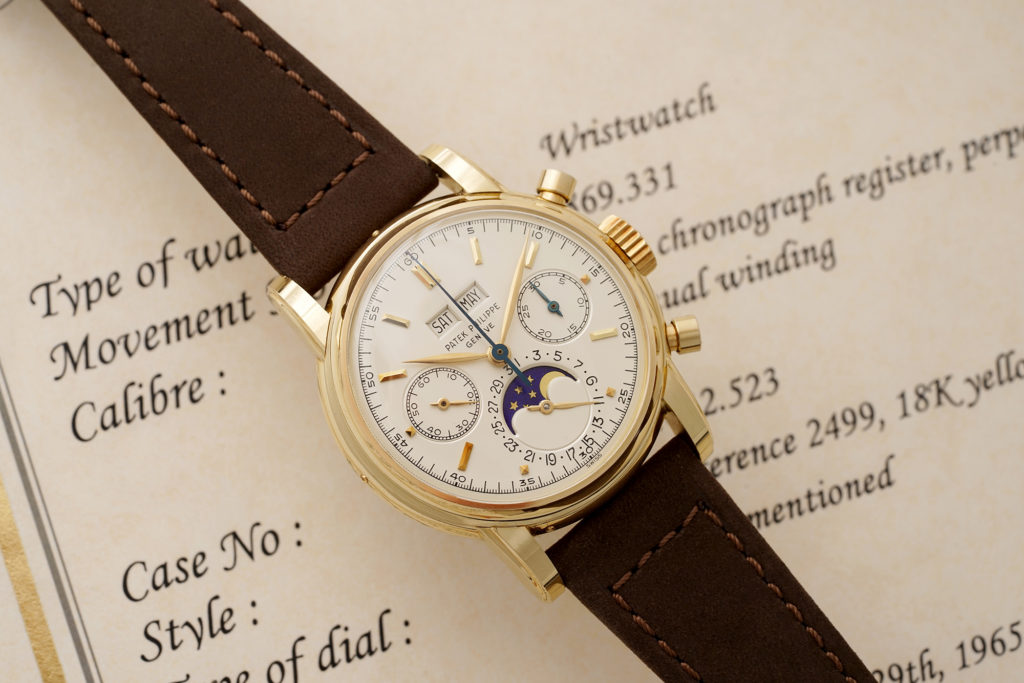 Aurel Bacs, Phillips’ Senior Consultant and Alex Ghotbi, Head of Watches, Continental Europe & Middle
East, jointly said, “We are thrilled and honoured to offer for the first time in close to two decades all four series of
the reference 2499 in one sale, making our Spring 2021 sale a once in a generation event. The Patek Philippe
reference 2499, in any dial or case combination, is considered one of, if not the most iconic and desirable trophy
watches to crown any collection. It was made for close to 35 years and only 349 examples are known – a production
of less than one piece a month. It therefore hails as one of the rarest collectible items in the world, on the same level as a Jackson Pollock painting or a vintage Ferrari sports car. There are collectible wristwatches, then there
are watches woven from the fabric of dreams, and the reference 2499 is of the latter. It is an endgame.” 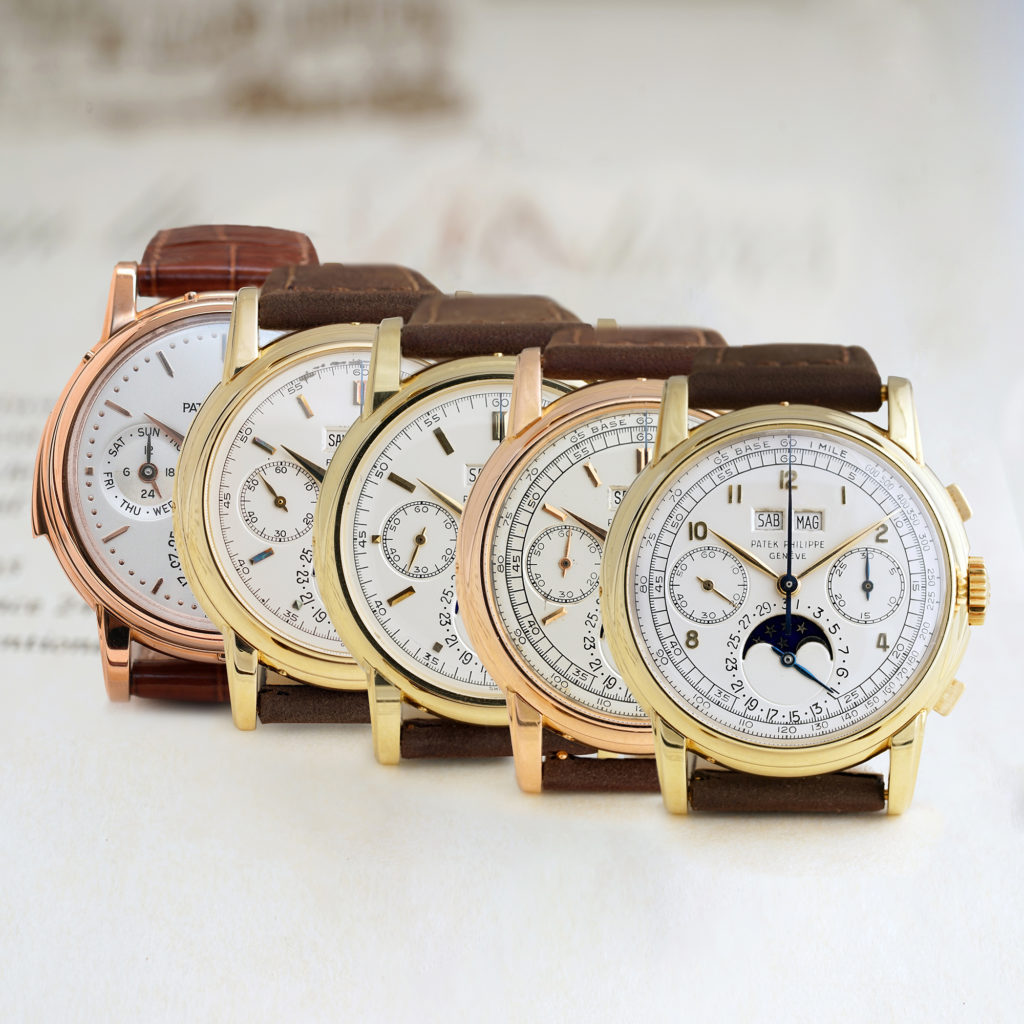 Thomas Perazzi, Head of Watches, Asia, added: “To satisfy the robust demand of finest timepieces in the global
watch community, we are proud to have also been entrusted with the exquisite and incredibly rare Patek Philippe
reference 3974 in pink gold, one of only five examples known to the market, for our Hong Kong auction in May.
Reappearing at auction for the first time in 13 years, the present lot is perfect and in unspoiled condition, with all
four stamped hallmarks still present behind the lugs. It is certainly a unique opportunity for any watch connoisseur
to acquire a Patek Philippe masterpiece.” 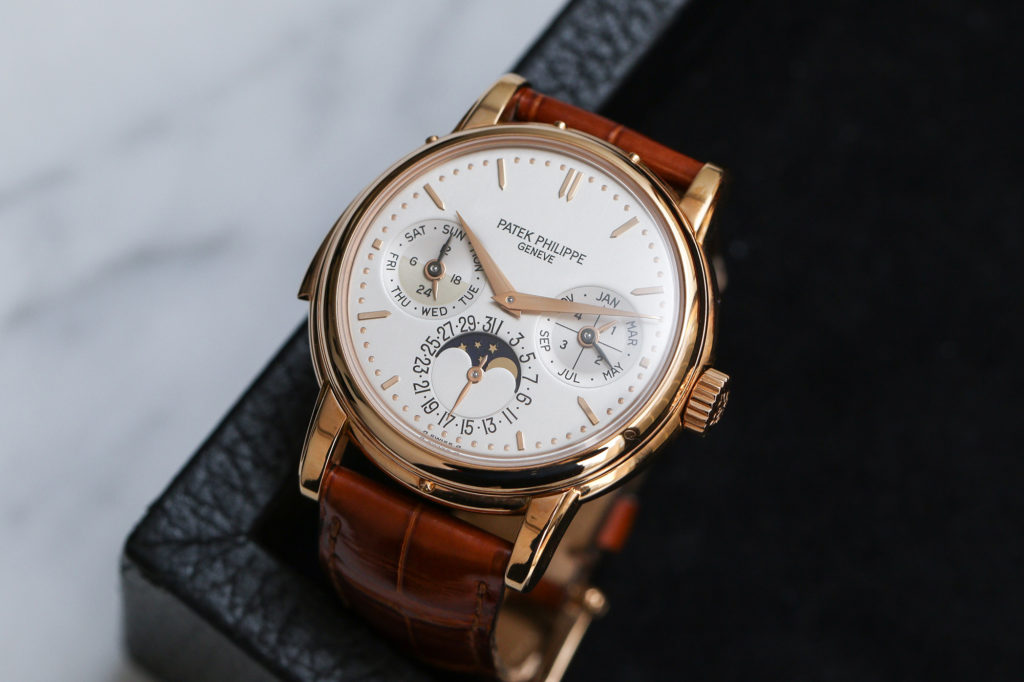 Patek Philippe Reference 2499 Full Set
Patek Phillipe’s iconic reference 2499 perpetual calendar chronograph set the blue print for perpetual calendar chronograph wristwatches some 40 or so years before this complication was made on a regular basis by other brands, making this reference one of, if not, the most influential and relevant horological references of the second half of the 20th century.

It is always an event when a Patek Philippe reference 2499 appears on the market, especially the earlier 1st and 2nd series models, but to see all four series appear in one auction is extraordinary. The 1st series was purchased in 2008 and is one of only 23 examples in yellow gold with Wenger case known so far. The 2nd series is one of the ultra-rare examples in pink gold, of which only nine examples are known. The watch was purchased in the early 1960s in the north of Germany and remained in the same family until 2010 when it was offered at auction for the first time. The current owner purchased it directly from the buyer at that auction, so this is a “Three owners since new” watch. It is highly unusual but perfectly appropriate that the watch comes with a German calendar.
The 3rd series last appeared on the market in 2004 and is one of the earliest examples known. It stands out with its full hard enamel dial, a feature that was fading out in the late 1960s and that collectors immensely appreciate today. 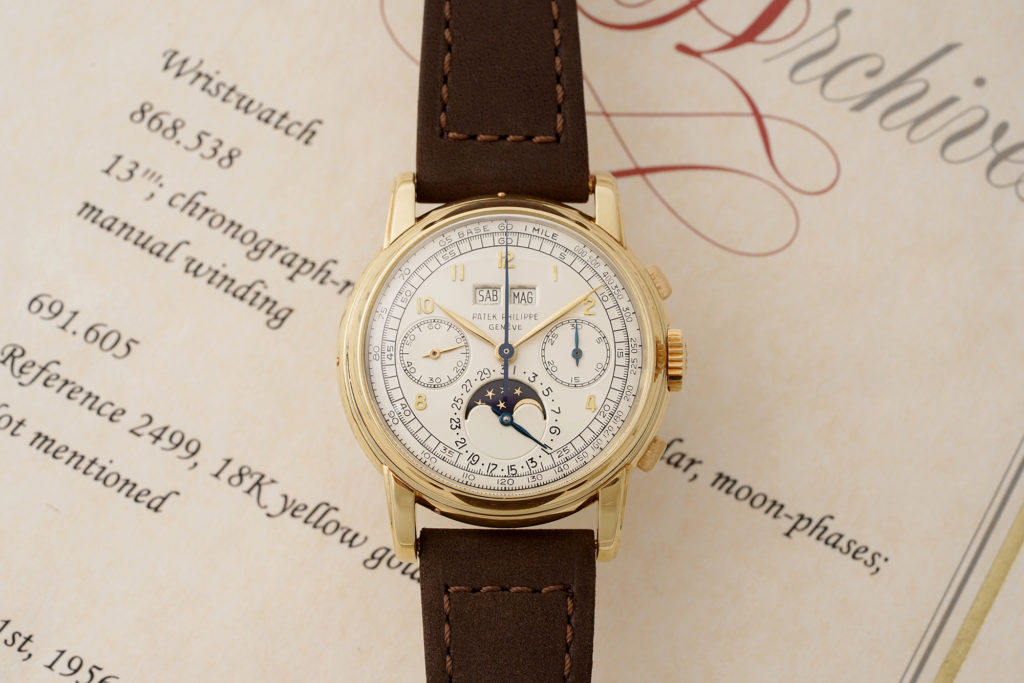 The 4th series is from 1985, the last year of production for this reference, and features a rather unusual German calendar (matching with the fact that the watch sold originally in Germany). It is only one of six examples known of this series with German calendar.
These four masterpieces share a number of things in common – not only their rarity and impeccable condition – but subtle details that set them apart from their peers, such as Italian or German calendar discs or rare German hallmarks on the caseback of the 2nd series.

The four series of the reference 2499 can generally be divided as follows: 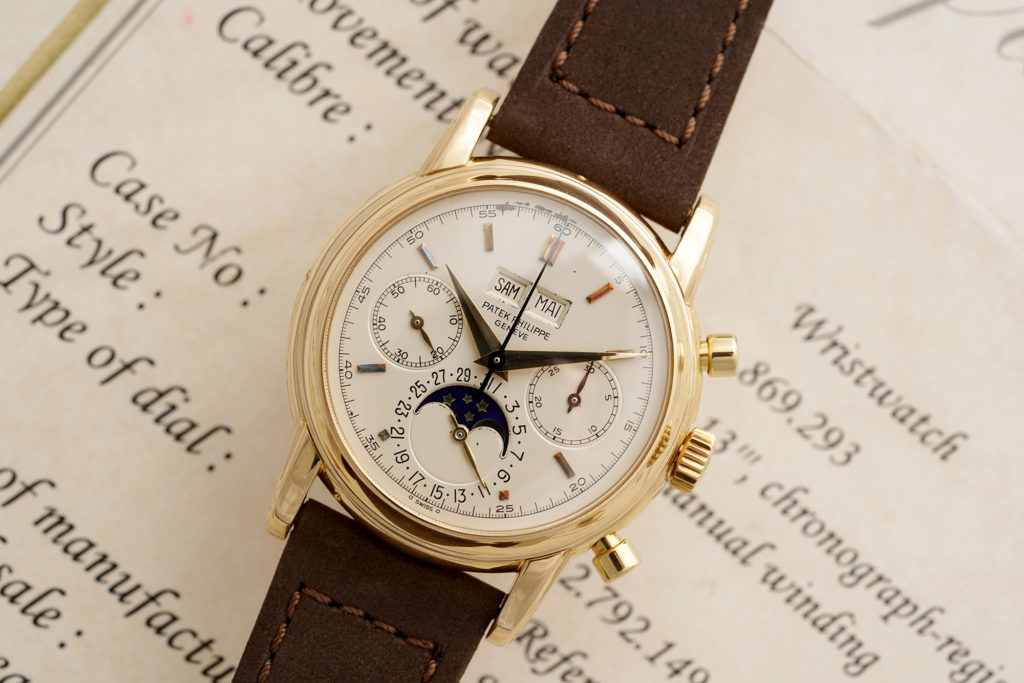 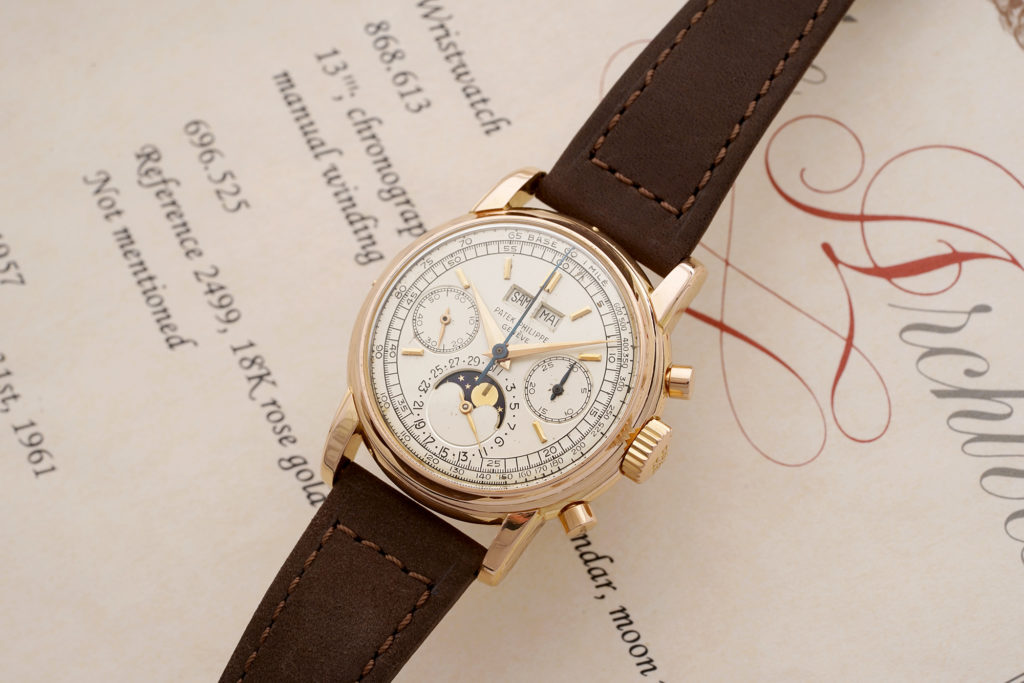 Patek Philippe Reference 3974
In 1989, Patek Philippe celebrated their 150th anniversary by launching one of the world’s most complicated wristwatches at the time, the reference 3974. This historical timepiece is the Maison’s first serially produced automatic self-winding wristwatch with two of the most cherished complications amongst collectors, a minute repeater and a perpetual calendar housed into one. The movement beating in the heart of this masterpiece is Patek Philippe’s caliber R27Q, an impressively thin movement measuring just 6.8mm, comprised of 467 components.
Not only is it a very early example, it is also cased in the equally stunning creation by the legendary casemaker of the 20th century, Jean-Pierre Hagmann. Originally trained as a jeweller and renowned for producing watch cases, most notably minute repeater cases for Patek Philippe, the work of Mr. Hagmann is the indicator of top-tier case quality. The reference 3974 had a production timeline of 13 years, only an estimated 120 examples in all metals were ever made and only five examples in pink gold are known.

ABOUT PHILLIPS IN ASSOCIATION WITH BACS & RUSSO
The team of specialists at Phillips Watches is dedicated to an uncompromised approach to quality, transparency, and client service, achieving a sale total of $133 million in 2020.
A selection of our recent record-breaking prices:
1. Paul Newman’s Rolex “Paul Newman” Daytona reference 6239 (CHF 17,709,894 / US$17,752,500) – New York Auction: Winning Icons – 26 October 2017 – Highest result ever achieved for any vintage wristwatch at auction.
2. Patek Philippe reference 1518 in stainless steel (CHF 11,020,000 / US$11,112,020) – Geneva Watch Auction: FOUR – 12 November 2016 – Highest result ever achieved for a vintage Patek Philippe wristwatch at auction.

ABOUT PHILLIPS
Phillips is a leading global platform for buying and selling 20th and 21st century art and design. With dedicated expertise in the areas of 20th Century and Contemporary Art, Design, Photographs, Editions, Watches, and Jewelry, Phillips offers professional services and advice on all aspects of collecting. Auctions and exhibitions are held at salerooms in New York, London, Geneva, and Hong Kong, while clients are further served through representative offices based throughout Europe, the United States and Asia. Phillips also offers an online auction platform accessible anywhere in the world. In addition to providing selling and buying opportunities through auction, Phillips brokers private sales and offers assistance with appraisals, valuations, and other financial services.
Visit www.phillips.com for further information.
*Estimates do not include buyer’s premium; prices achieved include the hammer price plus buyer’s premium.